Download this article in PDF format by Clicking Here

An ancient controversy has surfaced once again in our times. It revolves around the text of Psalm 22:16 (verse 17 in the Hebrew). In the Hebrew Masoretic text, the verse reads: “For dogs have encircled me, an evil congregation surrounded me; like a lion my hands and my feet.” The Lxx translation, however, did not read the Hebrew word כָּאֲרִי, kā’ari, “like a lion” but rather כָּאֲרווּ ka’aru, “they dug,” and thus they translated the word with the Greek word ὢρυξαν, ōruxsan, “they dug” or “they pierced.” The difference was whether the original word ended with a vav or a yod. Virtually all English translations (except those offered by Jewish publications) have followed the Lxx translation instead of the Masoretic text, giving us the well-known phrase, “they pierced my hands and my feet.” Unfortunately, the Psalms Scroll found at Qumran did not include 22:16[17] because the manuscript was damaged at the very place where it would have appeared. The pre-Masoretic text seemed lost forever. That is, until recently.

Scraps from a scroll containing some of the Psalms were discovered at Nachal Hever, and one scrap contained the line from Psalm 22:16 with the word in question well in view. Though the writing on the scrap was faint, under magnification it was easy to see and decipher. The word clearly ended in a vav not a yod, and was therefore a 3rd person plural verb: “they dug” or “they pierced.” Here was evidence that the Lxx translators had not “fooled” with the text, but had faithfully translated the Hebrew original that was before them. Since this scrap is dated (in accordance with the style of letters used) to 50-68 CE, it is almost 1000 years earlier than the Aleppo Codex, the earliest extant manuscript of the Masoretic text, and shows that in at least one of the earliest Hebrew traditions of Psalm 22, the word is not “like a lion” but “they dug” or “pierced.” Dr. Peter Flint, who published the principle edition of the scrap, notes that in the Herodian script, “vav and yod are usually distinguished, with vav generally longer than yod.”1 Indeed, in this instance, we have a perfect example for comparison, since the very next letter following the word in question is a yod: “my hands” (ידיה). The last letter of ka’aru is without doubt a vav when compared with the beginning letter of the next word which is clearly a yod. Here, then, is a Hebrew manuscript, pre-Christian, with “they dug” or “they pierced.”

But not everyone is convinced. Some (who apparently have not looked at the photographs of the manuscript) accuse Dr. Flint of misreading the letter. Others have argued that the Hebrew word כאר could never mean “pierce,” and that Christian interpreters have tried to make כאר (ka’ar) some form of כרה, karah, which does mean “to dig” (and by inference) “to pierce.” “But,” say the detractors, “the appearance of the aleph in the word precludes it being a form of karah, ‘to dig’ or ‘to pierce.’” Others have claimed that the word ידיה “my hands” is “misspelled” because it has the final ה, (implying that the text is not to be trusted in matters of spelling). Apparently those who make this judgment are unaware that the Hebrew of the Qumran documents often utilize the final ה to mark final diphthongs.2

Let’s look closer at the text. First, the phrase, as it stands in the Masoretic text, seems to lack a verb. Note that the Masoretic punctuation (the atnach under the word

) puts a stop after “surrounded me,” leaving the final phrase of the verse to stand on its own. The Targum felt this problem, and “fixed it” by adding the verb “bite” (נכת, nechat): “biting my hands and my feet like a lion.” But now we see the earliest Hebrew source did not have “like a lion” but wrote the word as a verb. But what verb did the Lxx (as well as the Syriac and the Vulgate) “see” when they translated “they dug (pierced) my hands and my feet?”

A verb with the three consonants כאר ka’ar does not show up in the lexicons of biblical Hebrew. Some, however, have suggested that the root is כוּר, kur, and that it was written in an archaic form with aleph instead of with vav. We actually do have examples of verbs with middle vav being spelled with aleph. For instance, the verb קוּם, kum, “to get up” is spelled with aleph in Hosea 10:14, Daniel 2:13; 3:3; 7:16, and the word רוּם, rum, “to be high above” is likewise spelled with aleph in Zechariah 14:10. So there is at least a reasonable possibility that an original verb spelled kur was written with aleph, i.e., ka’ar. One of the verbs in Hebrew that means “to dig” is karah (כרה). Originally that verb could have been spelled כוּר kur (final hey was added as an early “vowel marker”). This being the case, כָּאֲרוּ could be an alternate spelling for כָּרוּ, “they dug.”

In fact, another scrap from the Dead Sea Scrolls, 4Q88 f1-2, 2:24–25, gives evidence that כרה was originally known by the scribes at Qumran. While the fragment is small and damaged, it has been transcribed by Ulrich’3 as containing this line, כרו ידי ורגלי, “they pierced (כרה) my hands and my feet.” While the כ and ר of כרו are marked as difficult to read (see the transcription above in the boxed graphic), it is clear that no letter is interposed between them. Thus, this text gives witness to an original lamed-he verb, כלה, in the final line of Ps 22:17. 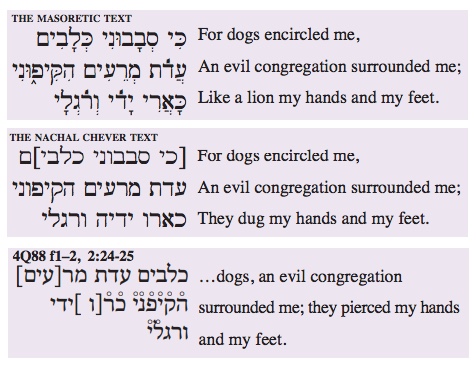 Interestingly, the Masorah itself suggests that there is something different going on in Psalm 22:16. The Masorah note attached to the word כָּאֲרִי indicates that it is found two times in this exact spelling (with the initial vowel chametz). The other occurrence is Isaiah 38:13. A Masoretic note attached to this verse4 indicates that though the word כארי is found in this exact form two times, the meanings are different (בתריֹ לשניֹ, “with two meanings”). “Like a lion” certainly fits the sense of Isaiah 38:13, so apparently the scribes recognized a different meaning for the word in Psalm 22.

We should conclude, then, that the original reading was likely the verbal form כָּרוּ, karu with an archaic spelling, כָּאֲרוּ, ka’aru, meaning “to dig.” Thus, the versions did not change the meaning of the Hebrew text, but reproduced it faithfully.

Then who is the subject of this verb? The most obvious referent is in the preceding line: the congregation of evil ones were those who “dug my hands and my feet.” Since this band of evil people are characterized metaphorically as wild dogs, it makes sense to understand the verb “to dig” as describing pawing or biting (as the Targum suggests). The subject of the Psalm is pictured as having hands and feet bloodied by the evil congregation that surrounds him.

That Yeshua referenced this Psalm while on the execution stake (Matt 27:46; Mk 15:34) must indicate that He saw Himself as fulfilling its prophetic purpose. Quoting the opening lines was like naming the Psalm’s title. And when He declared, “it is finished,” He paralleled the Psalm’s ending: “He has done it.”

Here, in the ancient Psalm of David, the suffering Messiah is prophetically and mystically portrayed. The darkness which came while He hung as the Pesach Lamb demonstrated the manner in which God viewed the sin bearer: He turned the shining of His face away (cf. Numbers 6:25, Psalm 67:1). The trauma He underwent was one which dislocated His bones (vv. 14, 17), and brought dehydration and thirst (v. 15). His hands and feet were bloodied by those who pierced them (v. 16). His enemies divided His clothes like the spoils of war (v. 18).

Yet His cries for help to God did not go unheeded. He knew of the victory He would win, and even of His resurrection, for He knew that He would stand as a witness to His brethren and give praises to the Almighty (vv. 22, 25). He knew that by His suffering He would accomplish the salvation of His people. In exchange for the joy of redeeming His bride, He endured the cross, despised the shame, and won the victory.

This prophetic picture of David, the sweet psalmist of Israel, was in perfect harmony with the message of the later prophets. Isaiah 53:5 speaks of the Servant being “pierced through” (מְחֹלָל, mecholal) for our transgressions, and Zechariah (12:10) describes the Messiah as “pierced” (דָּקָרווּ, daqaru).

We understand, then, that David, in writing Psalm 22, was looking ahead and describing the death of the Messiah. But not only His death, but also the victory which was His, and ours, in resurrection (Acts 2:31).