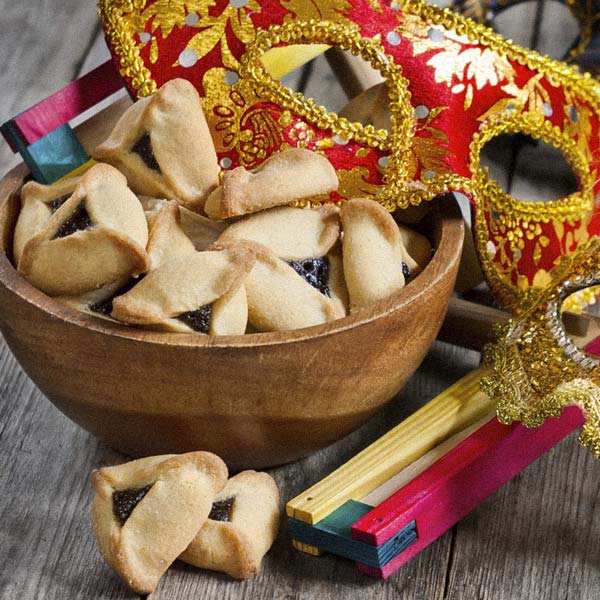 Purim, meaning “lots,” celebrates the victory which God gave to the Jews when it appeared that Haman, an evil officer in the Persian court, had gained the authority to attempt their mass destruction. The book of Esther is the biblical account, and lays the basis for the yearly festival.

At the end of the book of Esther, after summarizing the events which had taken place, the following is found:

Therefore they called these days Purim after the name of Pur. And because of the instructions in this letter, both what they had seen in this regard and what had happened to them, the Jews established and made a custom for themselves, and for their descendants, and for all those who allied themselves with them, so that they should not fail to celebrate these two days according to their regulation, and according to their appointed time annually. So these days were to be remembered and celebrated throughout every generation, every family, every province, and every city; and these days of Purim were not to fail from among the Jews, or their memory fade from their descendants. (Esther 9:26-28)

These mitzvot or obligations have been carried out in various ways throughout the centuries of Jewish history. Because of the requirement to read the story of Esther, it became tradition to write the biblical book on its own, small scroll and to refer to it as Megillat Ester, “the Esther Scroll.” Many of these were decorated with ornate initial capitals and other decorative art and are treasured as art pieces.

One tradition when listening to Esther being read is to drown out the name of Haman whenever it is read with noise and “booing,” etc. This is based upon the commandment of Deut 25:17-19:

Remember what Amalek did to you along the way when you came out from Egypt, how he met you along the way and attacked among you all the stragglers at your rear when you were faint and weary; and he did not fear God. Therefore it shall come about when the Lord your God has given you rest from all your surrounding enemies, in the land which the Lord your God gives you as an inheritance to possess, you shall blot out the memory of Amalek from under heaven; you must not forget.

Since Haman is an Amalekite (on the connection to Agag, king of the Amalekites—cf. Esther 3:1), the fulfilling of this commandment to “remember to blot out the name of Amalek” is fulfilled by blotting out the name of Haman when the story is read.

Special noise makers, called “groggers” are made for this purpose. They are a weighted stick on a handle that, when rotated, causes a gear to snap a noise-making stick, creating a ratcheting sound. But any noisemaker, including one’s voice, can be used to drown out the name of the enemy, Haman.

The festivity and rejoicing is carried out in a traditional meal on the afternoon of the 14th in which there are often skits and songs of a festive nature. Most congregations begin their festivities on the evening of the 14th on which the Megilah is read, eating together, and encouraging the children to dress up and come prepared for games, skits, and whatever seems appropriate for a party. It is common to see carnival type games for the kids to produce the festive atmosphere.

A Talmudic note (b.Megilot 7b) indicates that from the standpoint of some of the sages “it is the obligation of each person to be so drunk [on Purim] as not to be able to tell the difference between ‘Blessed be Mordechai’ and ‘Cursed by Haman.’” This was, of course, greatly disputed by other Sages and variously interpreted, but all came to realize that such a statement was obviously an exaggeration and simply tried to emphasize the festive nature of the day. The point of the Talmudic injunction was that each person should give in to honest celebration and festivities. But being drunk is something fools engage in. The point is simply that those who would otherwise not be inclined to “party” should give way to the festive nature of the day.

The giving of gifts to each other (mishloach manot) and giving gifts to the poor (mattanot le‘evyonim) are carried out individually or family to family.

The festival of Esther is yet another celebration of the victory that God has given to His people over enemies who wished to annihilate the Jewish nation. It marks a historical event which proves once again that God keeps His promises and that He is faithful to His covenant. It be comes, then, a time to reflect upon God’s care and protection, and the truth that He has not rejected Israel and that Israel lives because her God lives.

An excerpt from book Introduction to Torah Living, by Tim Hegg, p. 158-161