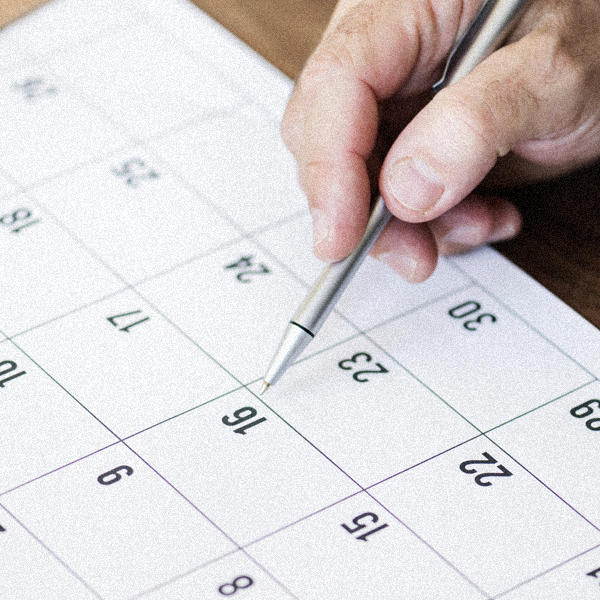 The present Jewish year is lunar as to months, and solar as to years. Thus, the months are regulated by the moon and are 29 days, 12 hours, 44 minutes, and 3 1/3 seconds long. The solar year is 365 days, 48 minutes, and 46 seconds long, which means that a solar year exceeds a lunar one (12 lunar months) by 11 days. Since the festivals are stated to coincide with the agricultural seasons of the year, the lunar calendar must constantly be adjusted. Without this adjustment, for instance, the festival of Shavuot (or Weeks, in which the harvested grain is counted each day between Pesach and Shavuot) would fall in the winter or fall in some years. In order to keep the lunar and solar calendars in sync, an additional month is added to seven of the 19 years which constitute the small (or lunar) cycle of the moon. During Talmudic times, these years were apparently determined according to agricultural conditions, but in modern times it has been decided that years 3, 6, 8, 11, 14, 17, and 19 of the cycle should receive an extra month. This month is called Ve-Adar or Adar Sheini, Adar II.

In the calendar month only complete days are reckoned, full months having 30 days, and defective months 29. The months Nisan, Sivan, Av, Tishri, Shevat and (in a leap year) Adar I are always full; Iyyar, Tammuz, Elul, Tevet, and Adar (Adar II in a leap year) always defective; Heshvan and Kislev vary. Thus, the common year will have either 353, 354 or 355 days, while the leap year will have 383, 384, or 385 days.

For religious purposes (reckoning the times fixed for prayers or the commencement and termination of Shabbat), the day is deemed to begin at sunset or at the end of twilight, based upon the Creation narrative which lists evening first: “and it was evening, and it was morning….”

Throughout history a number of people have arranged the calendar to fit their own sectarian purposes. Jeroboam apparently rearranged the calendar for the Northern tribes after the kingdom was divided (1 Kings 12:32-33), and the Samaritans likewise followed this northern calendar. During the time of Yeshua, the Pharisees and Sadducees each had their own calendar, as did other sects, such as those who lived in the Dead Sea region (who left what we call the Dead Sea Scrolls). Early Roman calendars were reckoned according to the building of the city of Rome, this being calculated as year 1. In the 4th century of our era, Constantine fixed the birth of Yeshua as year 1 (though his calculations were off ) and he thus initiated the “B.C.” (before Christ) and “A.D.” (ad Dominus, e.g., in the year of our Lord) nomenclature common in the Christian world today. The Jewish calendar reckons the years ad mundi, according to the creation of the world. Currently the Jewish calendar is approximately 240 years off since years during and after the exile were not counted.

After the Babylonian exile, those who returned to the land brought with them the Babylonian month names, which are still used to this day. The following chart notes the two major years (religious and civil) correlated with the months.

An excerpt from book Introduction to Torah Living, by Tim Hegg, p. 132-133